My name is Austin Chase and I’m a new sound editor here at Transported Audio! Eric brought me aboard in August and it’s been a wonderful first few months. I’ve already had the pleasure of working on numerous exciting and unique projects during my time here. These include over a dozen Star Wars Battlefront II videos, some intense repairing of dialogue recorded in the 1960s and, more recently, designing and building a custom projector hush box for our studio! This blog post will primarily focus on the hush box project.

The purpose of this project was twofold: to keep the client projector at a low temperature, and to prevent the noise of the projector from becoming a distraction in our studio.

Projectors are essentially big lights that create a ton of heat and, in turn, need big fans to keep them cool. The easiest way to minimize this fan noise is to contain the projector inside a sound-insulated box. However, enclosing the projector also insulates heat, so it’s necessary to create an intake/exhaust airflow system using computer fans. The bigger the fan blade, the slower and quieter you can run the fan. The downside to this is that it creates bigger holes in the box itself, allowing more of the projector’s fan noise to escape. To solve this, airflow channels must be created to keep air moving in the right direction and contain the noise where it belongs: inside the box and away from the ears of anyone in the studio. 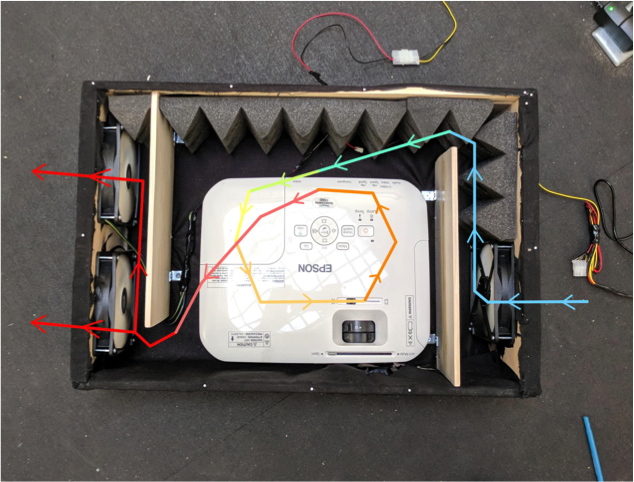 This project started months ago on internet forums and YouTube videos, where I slowly started to grasp what the best design would be for our needs. We came up with a plan and started gathering supplies. From powering the fans, to cutting holes in what used to be a wood wine box, we hit our fair share of technical hurdles. Two film/sound guys at Home Depot looking at hole saws is also just a ridiculous sight. Regardless, Eric and I did a solid job picking out the necessary tools and supplies.

Here’s a diagram of the box as it was coming together. The intake fan on the right brings cool air into the chamber, while the two fans on the left pull hot air out of the box. The wooden slats on either side of the projector prevent noise from the projector’s own fan from escaping out through the holes in the box.

During the design process, we realized that this box had to look good too. A giant wooden box in the middle of a mostly black studio would look dorky and unprofessional, so we decided to cover the box in a simple black fabric that we got from Michael’s. This store also supplied our hush box lens, which is just the glass from a small picture frame (a genius idea that Eric came up with).

This project required a great deal of unfamiliar knowledge and skill, but we took our time and managed to slowly put this thing together without running hitting any major issues along the way. It’s now up and running, but we are still making adjustments to the box- I imagine this will be an enjoyable work in progress for a while. One thing is for sure- each day brings new opportunities to learn completely new skills here at Transported Audio. 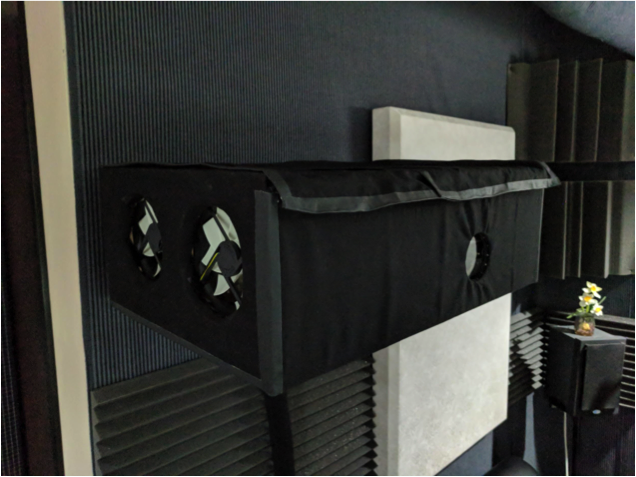